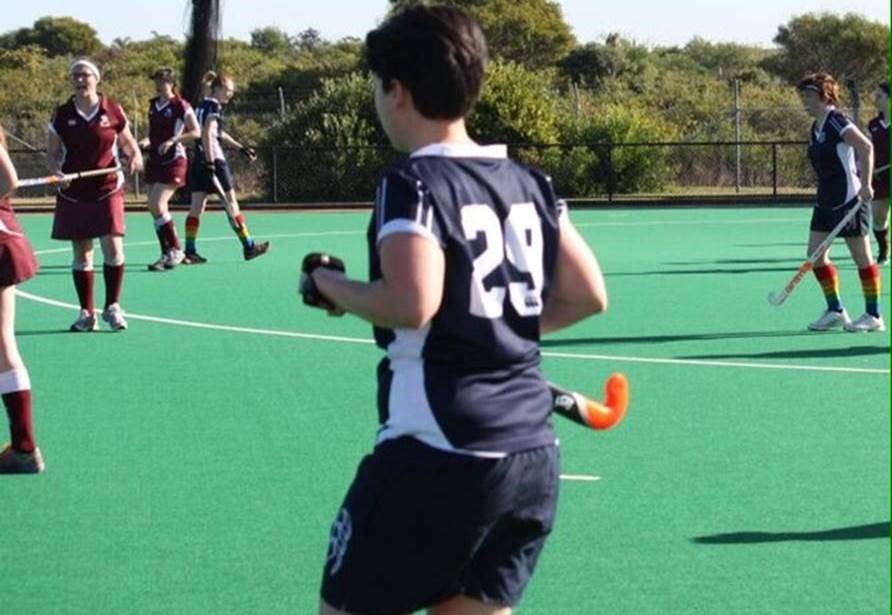 I meet Lisa at a cafe on Sydney’s Oxford Street, which is appropriate I guess since it’s across the road from some of the bars and clubs where we’ve shared many a night out with our hockey team. Lisa and I first met on the hockey field four years ago and, although I consider us to be good friends, I realised on my way to meet her that I really don’t know that much about her life before we met.

On the surface of it, Lisa says, she came from a pretty normal, albeit relatively privileged, background – growing up in a big house in northwest London with her wealthy Jewish family, private school, overseas holidays etc. Her father, a man of few words, ran a successful clothes manufacturing business; her mother stayed at home and later trained to be a physiologist; and her younger brother who she has always been close to. Even her teenage years were fairly standard – she rebelled but not too much, had run ins with parents but not too severe, learned the hard way from not working at school and later picked up the slack.

But scratch beneath the surface and things are always more complicated than they seem.

Lisa remembers early on that the messages from her family about being attracted to someone of the same sex were always negative – being gay was not okay. Things were very black and white with her parents, either right or wrong, and being gay was definitely wrong.

There were the small things, like the lesbian wedding in the sitcom Friends which her mother switched off saying ‘that’s not normal’, which jarred with Lisa as they always watched Friends. Then there were the big things, like the time a visiting Rabbi, an openly lesbian Rabbi, spoke at her synagogue on Kol Nidrei which Lisa describes as the most solemn of Jewish festivals. It was seen as a big scandal in the community at the time and many of the congregation walked out; she remembers her parents coming home upset that evening and again the message for Lisa was loud and clear.

She attended a same sex high school and remembers a commotion when she was about 14 when two older girls were caught kissing. Her overriding memory is of wondering why it was such a big deal, although she couldn’t understand all the fuss some girls made about boys either – she just didn’t think about being with someone, anyone, romantically until later.

‘I had no desire to be with anyone really, probably until I turned about 16. I had more important things to think about, like sport.’

However she did have a string of what she describes as ‘gay boyfriends’ who were more like friends – they went to the movies, exchanged innocent kisses, but in her words she just ‘wasn’t that fussed, it was just the thing to do!’

It wasn’t until she moved away to university she realised she didn’t really want to date boys and preferred girls, but hearing her talk about it, it doesn’t strike me that this was a big deal to her at all, it just was what it was. Then again she has never been against the idea that you fall in love with a person, and although she leans towards girls she never totally ruled out the idea that she could fall for a guy. She describes herself as very logical and scientific and so she couldn’t really decide until she had tried and tested both sides to find out which worked for her.

Lisa came out to her brother when she was 18. His response? ‘Yeah, I kind of figured, you’re like the only girl who doesn’t fancy [the England rugby player] Jonny Wilkinson!’ But it wasn’t until over 10 years later, at 29, that she came out to her parents, and her life was to change dramatically in the intervening decade.

She describes university as ‘a blur of quite a lot of women’: she met girls though sport, gay clubs and networks. And she always had a lot of gay male friends, some of whom are like family, so there were also a lot of men in her life. One of the stories she tells is from her 21st birthday when she went to a party and ended up drunkenly kissing a girl who was dressed as a pregnant ‘chav’ (think ‘bogan’ or ‘trailer trash’); they ended up hooking up whenever they saw each other but never dated.

There were other girls, one in particular that she liked very much but she was a self-harmer and in the end Lisa found her depressive episodes too difficult to handle. She also had quite a few straight male friends at university, a number of whom declared their undying love for her (sometimes uninvited in the middle of the night!) She even received a handful of marriage proposals, albeit drunken ones, although she puts this down to the fact that she was one of only four women out of 300 studying computer science.

Things quietened down for a few years after university when she moved home and began her career working for a large management consulting firm. Then in 2008, aged 25, a serious knee injury set in motion a series of events that would change everything.

Having cancelled a winter ski trip due to her knee surgery, Lisa and a friend plotted a trip to Australia from her hospital bed and they fly out as soon as she could walk again. A week of partying in Sydney ensued – her friend successfully hooking up with a number of girls, with Lisa left feeling a bit shy and without much luck. Mardi Gras parade day came around and, after an obligatory drink in the Stonewall Hotel, they were lining up outside to watch the parade when Lisa noticed a girl drunkenly falling off someone’s shoulders. Inevitably Lisa’s friend ended up taking one of the girls home. The other girl suggested they go and play pool, and that’s how Lisa met Georgie.

The evening ended with Lisa and Georgie spending the night together on a hostel sofa due to their friends having already ‘occupied’ the bedroom. Lisa was due to fly to Japan a few days later, but was first treated to a tour of the navy ship where Georgie worked. On their last night the girls all arranged to meet for dinner; thankfully Lisa lost the $20 bet she made that Georgie and her friend wouldn’t show up.

When Lisa made it home to England she looked on the whole thing as a holiday fling at first – they became Facebook friends and she left it at that. It wasn’t until she started receiving text messages from Georgie, which turned into messenger chats, which turned into skyping, that she realised it might be something more. Lisa was sceptical about long distance relationships but Georgie persisted and they continued to get to know each other.

Then, as Lisa puts it, ‘the stars just seemed to align.‘ She was able to take another trip to Sydney, then Georgie’s navy ship made a stop in London, then the GFC hit and Lisa’s firm started to send people to Australia and she thought, why not?

More than five years later they are still together in Sydney. Georgie is still with the Australian Navy which can sometimes be hard for both of them as she can be away for anything up to a year at a time. The real challenge is that in some areas they both seem to want slightly different things out of life, although as time goes on they have aligned more and more. Lisa describes herself as quite maternal and it has never occurred to her that, just because she wasn’t with a man, she wouldn’t have children. Georgie on the other hand never really considered that she would, particularly as she is so committed to her naval career. They are currently saving to buy a house in Sydney and Lisa still hopes very much they will one day have children.

When she was nearing her thirtieth birthday last year Lisa knew she had to tell her parents. She says she just couldn’t bear the thought of turning 30 and not having told them.

‘There were things that needed to move on in my life that were held up by the fact that my parents didn’t know I was gay. In the end I just had to tell them’.

She ended up writing an email as she wanted to give her parents time to respond, but was too nervous to send a letter and wait weeks for a response. Georgie was away on a military tour but Lisa’s brother and his girlfriend were visiting Australia at the time so they helped her draft an email and they all pressed send together.

‘My parents were okay at first when I told them and said all the things that you should say, but as it turns out it wasn’t really what they felt’.

She knew her parents didn’t think it was normal, and she knew her they would try to find a reason. Sure enough her mother soon wanted answers. What had happened to her? Had she been abused? Why was she anti men?  Lisa now believes her mother’s prejudices are more about what everyone else thinks and how she is perceived by others which, as Lisa says, must be exhausting. She is sad for her mum that she hasn’t even been able to tell her closest friends.

Things were difficult for a while and her parents tried their best to ‘fix’ her, sending the names of several therapists in Sydney. Lisa feels that it was almost as though her mother was mourning the life she would be missing out on – being mother of the bride at the big white wedding and having grandchildren. Things she could see all around her that she felt she would never have. Lisa eventually had to break it to her and say ‘this is my life, not yours’.

‘I tell her I am staying in Australia and that I’m happy here with Georgie. Her response? ‘Well I’m happy when I eat chocolate cake, but I regret it later”.

Lisa laughs when she tells me this story, but she is sad that she doesn’t feel she is able to talk to her parents openly about her relationship. The hard times, things you would expect in any long-term relationship, are used against her as an excuse to tell her that this isn’t right for her. She says she sometimes finds it hard to separate between what they say and her own feelings when things get tough, which often just makes things harder.

Without having such big secret from her parents she thinks things might have happened a bit earlier in her life – marriage, having children etc. She has seen this reflected in other gay friends too, as if people are trying to wait for everyone to either be happy or at least comfortable before moving forward with their lives. She accepts now that she may never get the acceptance she would like, and she might just have to go ahead with her life without it.

Lisa doesn’t see her relationship with a woman as something that defines her – she is caring and generous, good her job, likes sport; she just happens to be gay (or a lesbian, or queer, or whatever). Lisa calls herself gay to keep it simple, but she welcomes the recent expanding of labels for sexuality and even the choice not to label if that’s what people prefer. Lisa is Lisa, and she hopes one day her parents will see it that way too.